Our 3D graphic artists have placed another exclusive masterpiece in the engine house: the Eagle (Adler), the first German locomotive.

Thanks to detailed technical drawings and perfect models we have been able to design the engine as close to reality as never before. Every single lever is replicated, all rivets included and all original materials depicted correctly following some research. Be it the wooden hinges of the boiler or the copper steam dome: real nerds can now spend their evenings adoring the details of the new series.

The model – the Eagle of the Bavarian Ludwig Railway 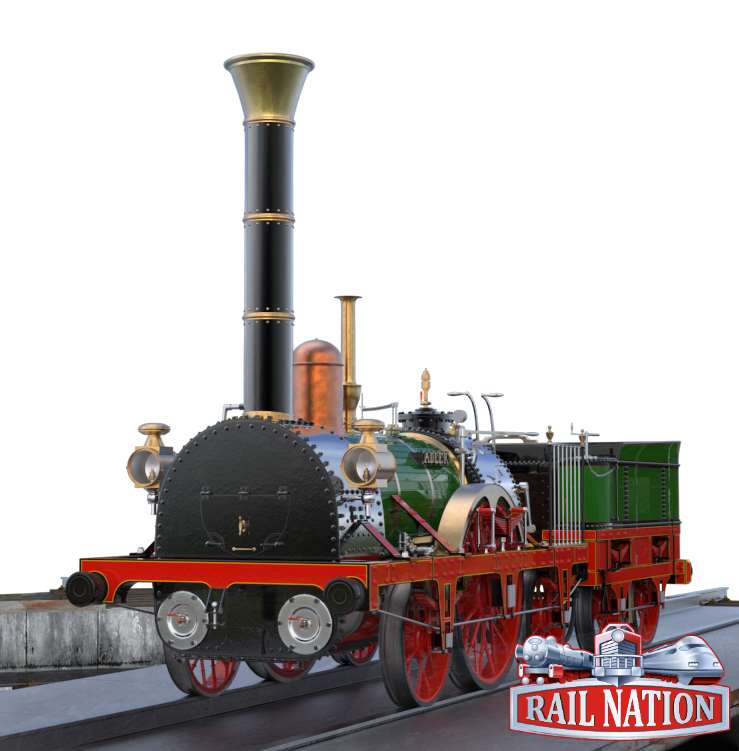 The Bavarian Ludwig Railway imported the Eagle from England to Nuremberg in 1935. Its manufacturer was the Robert Stephenson Co. from Newcastle. The delivery was a challenge as storms and low water on the Rhine river complicated matters. Once arrived in Nuremberg, the engine’s individual parts were assembled and it was tested from 10th November onwards. The railway operators not only imported the engine: the conductor, William Wilson, also came to Nuremberg from England.
From 7th December 1835, the engine was used to transport passengers, beer kegs and livestock to Fürth. This makes the Eagle the first commercially successful engine in Germany. About 20 years earlier steam machines made in Germany were tested, but they have never been used successfully.

The Eagle however remained in service continuously until 1857 and marked the beginning of the success story of railways in Germany. The engine was later still used as a stationary steam machine for some time, before it was eventually sold to a scrap dealer. No original engine has been preserved, but a number of replicas do exist. To celebrate „100 years of railway in Germany“ a working replica was produced. This model is still functional today, even though it underwent costly reproduction work following a fire in the engine house of the Nuremberg Traffic Museum in 2005.
By the way, the Eagle also had a sister engine. The Arrow (Pfeil) entered service in 1836. However, due to technical faults it was shut down five years before the Eagle.

Drive like an Eagle – this is how you get the series

The Eagle is available as an alternative production series for the Swallow. It is a special gift for all Rail Nation users who have bought Gold in the game. The engine will be unlocked immediately for all players, who have made a purchase in the Gold Shop in the past.
All players who will make a purchase in the Gold Shop in the future will then also have it unlocked right away. If you are thinking about buying a starter package for the next round: now there’s even more reasons to do so!
So why not head over to Rail Nation, where you can view the production series directly in the engine purchase screen.

The new diesel engines of era 4 have arrived!
Loading...