Lights, camera, action! Get rewards in your train station now

With the update of August 26th, you will discover a change in your train station. The station buildings Restaurant, Shopping centre and the Hotel have been given a new feature which allows you to increase the buildings’ production by 10% and, with some luck, even rewards you with a surprise prize. 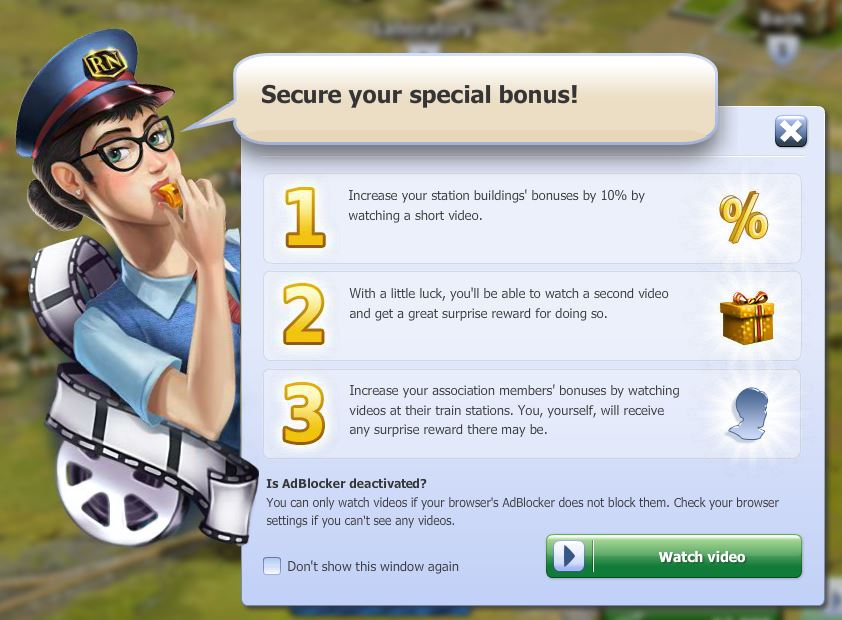 On the German server “Kompressor”, the first players have already been using this feature. After making sure everything is working and making the final touches we will brought it to all game worlds today.
By the way: this version also includes some proper improvements of the schedules. Setting up and copying schedules is now easier and more reliable. With this, we implement one of the most prominent wishes from within the community.

How does the new feature work?

You now have a small play button next to the Restaurant, Shopping centre and Hotel buildings.
As soon as you click the button, the window shone above will open. If you no longer wish to see this window, please click on “No longer show this window”. If you click “Watch video”, a video will be shown and you receive a 10% bonus on the next production of the station building as long as you watch the video until the end.
The 10% bonus production is available once per production cycle for the buildings Restaurant, Shopping Centre and Hotel.
With a bit of luck, you have the chance to watch a second video and get your hands on amazing surprise prizes.

You can also use this new feature, even if the bonus is not yet ready. After watching the video, the bonus will be unlocked for the next collection. Do you play in an association? Then it gets even better: you can also watch videos for other association members. They will then benefit from the increased bonus. And you have the chance of being shown the second video after the first and win a surprise prize. The bonus of which will then be yours and everyone benefits.

Do I have to use this feature to receive the production of my station buildings?

No, you don’t! Of course it will still be possible to collect the bonuses without watching videos.

What do I do if I see an inappropriate advert?

Become a leader in Rail Nation!
NEW steam engines for the second era!
The new client – from the app to the PTR
Loading...